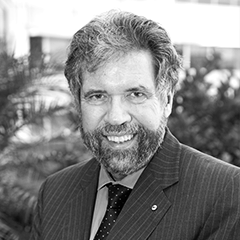 Professor Richard Kefford AM is Professor of Cancer Medicine, Head, Department of Clinical Medicine and Head, Cancer Clinical Program at Macquarie University. He is also an Honorary Professor in Medicine at the University of Sydney and Faculty Member at Melanoma Institute Australia.

Richard graduated in medicine from the University of Sydney then trained in medical oncology at Royal Prince Alfred Hospital, and as a graduate student at the Ludwig Institute for Cancer Research, Sydney, where he gained a PhD in purine biochemistry. His postdoctoral period was spent with Nobel Laureate, Dr Cesar Milstein at the Laboratory of Molecular Biology, MRC Centre, Cambridge, UK on a Howard Florey Fellowship of the Royal Society of London.

Richard has conducted research into molecular genetics of melanoma continuously since 1985. His research group played a major role in the mapping of the melanoma susceptibility gene p16 and in characterising hereditary mutations in this gene, which predispose individuals to a very high risk of melanoma. He has been Principal Investigator on more than 60 clinical trials in cancer treatment including Phase 1 trials of drugs targeting the MAP kinase pathway and immune check-point inhibitors like anti-PD1.

Richard was awarded Member of the Order of Australia (AM) for service to oncology and medical education. He is a Fellow of the Australian Academy of Health and Medical Sciences (FAAHMS) and was awarded the Premier’s Award for Outstanding Cancer Researcher of the Year in 2017. He is the author of over 400 papers in the peer-reviewed medical literature.